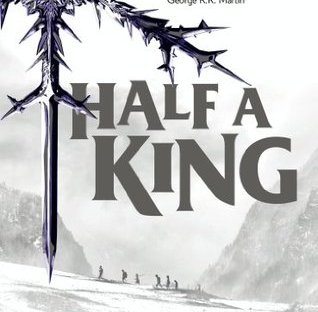 Hello people! I hope you all are safe and happy, and that you are reading great books! I am in a strange mood this week, reading-wise, but I think it is mostly because it is a really busy week, and I really hope that things would go back to normal next week! Anyway, today I am here with a review, sort of, so let’s get started!

“I swore an oath to avenge the death of my father. I may be half a man, but I swore a whole oath.”
Prince Yarvi has vowed to regain a throne he never wanted. But first he must survive cruelty, chains, and the bitter waters of the Shattered Sea. And he must do it all with only one good hand.
The deceived will become the deceiver.
Born a weakling in the eyes of his father, Yarvi is alone in a world where a strong arm and a cold heart rule. He cannot grip a shield or swing an axe, so he must sharpen his mind to a deadly edge.
The betrayed will become the betrayer.
Gathering a strange fellowship of the outcast and the lost, he finds they can do more to help him become the man he needs to be than any court of nobles could.
Will the usurped become the usurper?
But even with loyal friends at his side, Yarvi finds his path may end as it began—in twists, and traps, and tragedy.

This was a re-read, because I started this series ages ago, literally, but then I never continued past this first volume. Let’s be clear here, it was not the book faults. It was one of those cases of so many books, and so little time, as more often than not happens with us bookdragons with the attention span of a gold fish. I don’t know if I am the only one of this rare species, but one of our most famous features is that we let ourselves be easily distracted by all the new and shiny books and series out there, and so finishing a series is a hard task. One that we try to do, because obviously we want to finish the series, but we also want to start all the new series out there, and read all the books in the world.
But I am digressing, let’s go back to the book at hand. So, I read it the first time when I already knew Abercrombie as an author, since my first book was The Heroes (and I loved that book. The first page is one of the best scenes ever written. It is pure genius!), and now I have re-read it after (finally) have read all The First Law trilogy, and after a lot of years passed. My tastes are not exactly the same, but I have to say that my enjoyment didn’t vary, at least not by much. I had a really good time with it both times, and also my opinions about it didn’t change. And I think that this is what had me a bit confused.

But let me explain better. I enjoyed the book, and there is quite a lot going on, but what made me a bit confused about it is its genre. Or better yet, its intended target. It is a coming of age story, and usually this kind of story are more “intended” for a younger target (and I am not saying that adults can’t read or won’t enjoy these stories, it is not what I am saying, and it has nothing to do with the point I am trying to make), and all the book has a sort of vague “YA” vibes to it. And the first time I have read it I labeled it like YA. It made me (and it makes me still) think about Prince of Thorns by Mark Lawrence, but less mature, in some ways. And in a lot of ways it is less mature than the other series by Abercrombie. And the vibe is YA but… but it is way more adult than your usual YA. It is grimdark, and usually it is not a label attached to books intended for a younger target. But the story is quite grim, and the language is way more crude than your usual YA. (I have to say that I have read the Italian translation, but I don’t think that they did a bad work with it, especially if we are talking about the choose of words). All these things together creates a book that is way mature than your usual book for a younger audience, but it is not yet as mature as an adult book. And this is quite a stupid thing, really, but it is the thing that bugged me while I was reading.

I admit that the label is really a stupid thing, because what it is really important is that the book is a good book. And we have an interesting plot (maybe it is not the most original or compelling, and this can be proof that Abercrombie’s strength is in its characters, since this book is quite balanced between plot oriented and characters oriented, while The First Law and its standalones are way more characters driven, and I have no doubt that these last ones are way way better!, but it gets the job done), a passable world-building (the part about the gods is well thought and I really liked it, for example) and some interesting characters. It is true that I think that this book is not as good as the other ones, but it is an enjoyable book, and I am looking forward to the other books in this series, so the book is good. And yet I let myself be distracted by this thing, that it is just a detail, and even a quite stupid one.

I am sorry, this is not the usual review. It is more a consideration about an element of the book, and one minor at that. But I wanted to share it with you all, and know if, maybe, it happens to you sometimes, to find something minor that get you started and that you can’t shake.

And what about you? Have you read this series? Or it happens to you too, that sometimes you would find something that bugger you even if it is a minor thing? Let me know!!

11 thoughts on “Review: Half A King or not really a review, sorry about that”